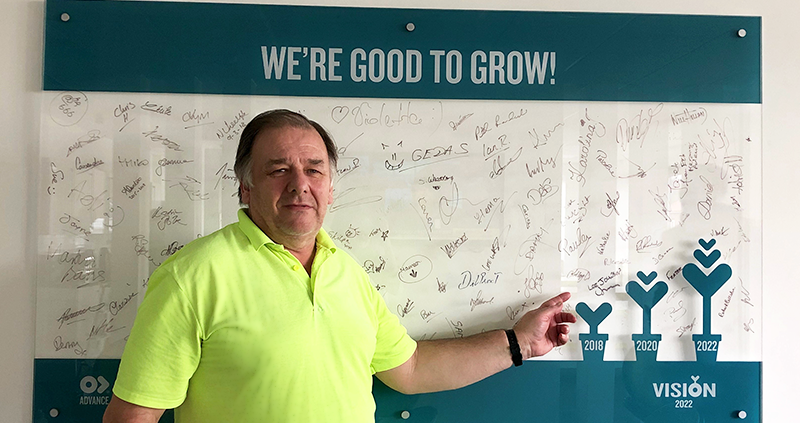 Meet Jeff Taylor, one of our most experienced Converting Cell Leaders. He took some time to reflect on his 30 years at Advance and to tell us what he’s looking forward to in his upcoming retirement. Read on to find out more.

How long have you worked at Advance Tapes?
Well, on the 19th March 2020 was my 30th anniversary. I can remember my first day just about, I was working down at Pinfold Road. I’ve always worked in converting but originally, I was working in cutting as a Service Man. I was involved in servicing the cutting machines to keep a steady flow of rolls, picking out logs, sorting out rubbish and learning a bit of operating here and there and that’s how it started. Before I worked at Advance, I worked in the shoe trade which I had done for a few years. The speed that I built up working in the shoe trade really helped me at Advance as it taught me how to work at a good rate.

How have your responsibilities changes since you first started?
So, I originally started as a Service Man and then I got promoted to be an Operator on the cutting machine. I first learned to operate on a machine that was a single shaft machine with mostly manual operation. Then I moved onto a double shaft machine that was used to cut the small core PVC logs. A while later I was asked to be a Cell Leader and have been ever since. I started as a serviceman on the Pinfold site, just after we got the Range 1 commissioned in 1990.

What has been your most memorable moment of your 30 years at Advance?
Oh yes, the trip to Taiwan. I was part of a team that went out to see the C2 cutting machine that would enable us to cut on a 3-inch shaft. We had a weekend in Hong Kong and then travelled on to Taipei in Taiwan to see the company that made the machine and then also went to a few trade fairs which was very interesting. It was a great experienced we had some interesting food including Catfish.

I’ve been lucky enough to see two sites develop in my time at Advance. When I first joined the company had just moved to the Pinfold Road site and then in 2011, I helped with the transfer over to the new Westmoreland Site (Head Office and Converting).

Is there a specific project that you are working on at the moment that you think people might be interested to hear about?
We are rolling out 5S practices across the shop floor at both sites and as Cell Leaders we are key to implementing this. 5S is a Lean Manufacturing tool that improves workplace efficiency and helps towards eliminating waste. My team have really embraced the 5S system and we are starting to see some real benefits. We are also in the process of developing Personal Development Plans for each member of our team to help them identify specific areas for improvement and push them to be their best.

If you could switch to any career what would it be?
I used to like playing football and would have liked to have been a footballer, but it didn’t work out. I played for a local league in Leicester on Saturday afternoons and Sunday mornings but unfortunately, I never got spotted.

My other favourite hobby was darts. I used to play to a high standard and the team that I played for won most of the divisions we were in and the knockout cups.

I like watching most sports including football, darts and rugby. I used to be a Leicester City fan back when they were at the old ground and used to go to matches with my brother-in-law at the time. I haven’t been to the new stadium. I also used to love watching Manchester United back when they were in their hay day.

Who is the funniest person you work with?
I don’t know about funniest, but I really like working with all my team particularly the other Converting Cell Leaders such as Jason Tookey, Neil Wheatley and Production Manager, Will Holland.

What hobby do you have that other people might not know about?
My other pastime used to be fishing. Anybody that’s been here long enough will tell you that I used to win all the fishing tournaments. We used to have an Advance Tapes fishing league. We decided that there was enough of us that enjoyed fishing that we would create a league and day out from it. We used to have a weigh in at the end of the day and whoever had caught the most in weight would win. There was about 8 or 9 of us that used to go to the Ashby Folville fishing lakes, a few still work here including Byron Barrow (Range 2 Operator), Jason Tookey and Neil Wheatley (Converting Cell Leaders). It lasted about 5 or 6 years and it was great fun.

If you had £10 million what would you do with it?
Oh, I’d enjoy it! I’d do all the things I wanted to do and haven’t done yet. I’d do a bit of travel, look after the family and make sure the children were alright. I’ve always wanted to go to Mauritius and the Maldives. I’d have to talk the wife into going though. I say to her where do you want to go on holiday this year and she always says Cornwall.

I would like to visit a new place, explore the culture and see what it’s like to be a local. We like a mixture between experiencing the culture, local food and having a bit of night life, that would be my idea of a good trip. I’m not bothered about just lying on the beach, I like having to explore.

What do you think you are most known for at work?
I like getting the job done. My team also have names for me including grumpy but its all in good humour.

If you could have a superpower what would it be and why?
I’d have telepathy. It would be great to communicate with my team without having to go over to the machines.

What is your idea of success in your job?
Being satisfied that I’ve done my job for the day to the best of my ability. It’s a team effort to get the work done and I’ve got to help my team perform to their best.

What do you like most about your job?
I like working as a team with the other Cell Leaders and Managers on the converting shopfloor.

If you could swap places with anyone in the world for the day who would it be?
I’d love to be George Best for the day – the wizard. He was very, very good. I would like to have had some of his skill and then maybe I would have made it as a footballer.

Where is your favourite place in the world?
My favourite place in the world is this little beach in Cornwall. The first time we saw it we were at the Minack theatre and I looked down from the cliffs and could see a cove of clear blue sea and white sand. We didn’t actually go down to the beach until a few years later but when we did it was beautiful. When I was growing up, we went to the beach on the east coast to Great Yarmouth and the sea there is often a lot murkier. But the sea is much clearer in Cornwall and my youngest daughter loves to go snorkelling there.

What are your plans for your future retirement?
I don’t know I haven’t spoken to the wife properly about it yet. I’m sure she’s got lots of little jobs lined up for me. I don’t really like gardening but I’m sure that will come into it somewhere. I don’t mind though as long as we are together, we will be alright. I’m looking forward to spending more time together.

We have placed cookies on your computer to help make this website better. If you continue to use this site we will assume you are happy with this

We may request cookies to be set on your device. We use cookies to let us know when you visit our websites, how you interact with us, to enrich your user experience, and to customize your relationship with our website.

Click on the different category headings to find out more. You can also change some of your preferences. Note that blocking some types of cookies may impact your experience on our websites and the services we are able to offer.

These cookies are strictly necessary to provide you with services available through our website and to use some of its features.

Because these cookies are strictly necessary to deliver the website, refuseing them will have impact how our site functions. You always can block or delete cookies by changing your browser settings and force blocking all cookies on this website. But this will always prompt you to accept/refuse cookies when revisiting our site.

We fully respect if you want to refuse cookies but to avoid asking you again and again kindly allow us to store a cookie for that. You are free to opt out any time or opt in for other cookies to get a better experience. If you refuse cookies we will remove all set cookies in our domain.

We provide you with a list of stored cookies on your computer in our domain so you can check what we stored. Due to security reasons we are not able to show or modify cookies from other domains. You can check these in your browser security settings.

We also use different external services like Google Webfonts, Google Maps, and external Video providers. Since these providers may collect personal data like your IP address we allow you to block them here. Please be aware that this might heavily reduce the functionality and appearance of our site. Changes will take effect once you reload the page.