You are here: Home1 / Tape Talk2 / News3 / Case Study: AT7 on track for success with new AGV solution 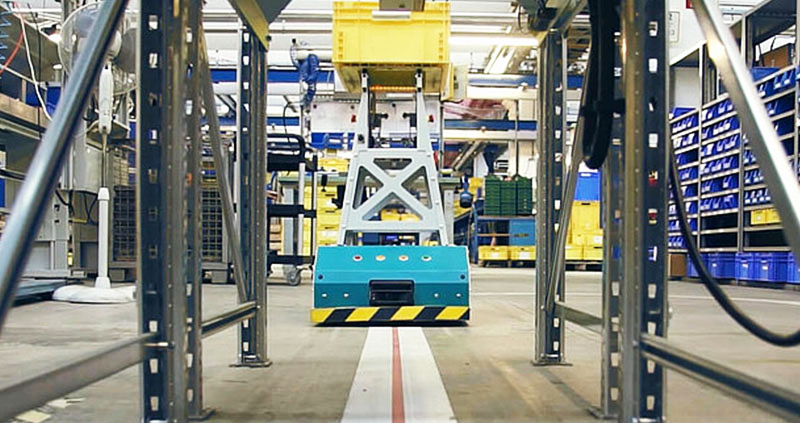 We were recently very pleased to hear that one of Advance’s most widely-used products, AT7 PVC Electrial Insulation Tape, had been selected by BITO Systems to become part of a breakthrough system of improvement of flexibility and efficiency of production operations.

BITO Systems is an international manufacturer based in Germany but operating globally. BITO specialise in storage solutions, particularly for industrial environments, including containers, shelving and pallet racking systems. To meet the needs of their customers, BITO Systems has recently developed an Automated Guided Vehicle (AGV) called LEO Locative, to ensure fast material transport and reduce travel during the production process.

LEO Locative has been designed to carry bins, containers and cartons of size 600 x 400 mm and accepts loads up to 20 kg. Its battery life is approximately 8 hours. Navigation commands and tasks are transmitted via markers on the floor. BITO Systems have produced this great video showing how it works in more detail.

In order to make this innovation possible, BITO Systems was looking for a floor marking solution to enable a decentralised and completely autonomous “plug and play” navigation system that allows for quick installation without infrastructure or external support. Indeed, vehicle routes are defined by simply sticking an adhesive tape on the ground.

Following their extensive research, the product development team at BITO Systems determined that AT7 PVC Electrical Insulation Tape, one of Advance’s most popular products, was the best solution for this application.

Not only were AT7’s properties a perfect match for BITO Systems ‘requirements, it significantly outperformed similar products during the team’s testing process.   The LEO Locative recognizes the colours of the track that indicates the right path. AT7 is offered in red, blue and green, to identify the different routes.

With the help of AT7, BITO were able to complete the implementation of their AGV system, which has proven extremely successful. Since its launch, many international manufacturers have adopted this revolutionary system which have been an integral part of the prestigious award-winning “UK Logistics Award” project that BITO Systems has realized at Siemens Industrial Turbomachinery (Lincoln) in 2018.

The Advance Tapes team visited the BITO Systems showroom in Nuneaton (UK) in November 2017 and is now looking forward to another opportunity to see the Leo Locative in action.

Want to join the discussion?
Feel free to contribute!

We have placed cookies on your computer to help make this website better. If you continue to use this site we will assume you are happy with this

We may request cookies to be set on your device. We use cookies to let us know when you visit our websites, how you interact with us, to enrich your user experience, and to customize your relationship with our website.

Click on the different category headings to find out more. You can also change some of your preferences. Note that blocking some types of cookies may impact your experience on our websites and the services we are able to offer.

These cookies are strictly necessary to provide you with services available through our website and to use some of its features.

Because these cookies are strictly necessary to deliver the website, refuseing them will have impact how our site functions. You always can block or delete cookies by changing your browser settings and force blocking all cookies on this website. But this will always prompt you to accept/refuse cookies when revisiting our site.

We fully respect if you want to refuse cookies but to avoid asking you again and again kindly allow us to store a cookie for that. You are free to opt out any time or opt in for other cookies to get a better experience. If you refuse cookies we will remove all set cookies in our domain.

We provide you with a list of stored cookies on your computer in our domain so you can check what we stored. Due to security reasons we are not able to show or modify cookies from other domains. You can check these in your browser security settings.

We also use different external services like Google Webfonts, Google Maps, and external Video providers. Since these providers may collect personal data like your IP address we allow you to block them here. Please be aware that this might heavily reduce the functionality and appearance of our site. Changes will take effect once you reload the page.